The organisers of Bayern Rundfahrt (UCI 2.HC) have confirmed that they are struggling to secure the budget for next year’s race. The race is scheduled to take place from the 25th to the 29th of May.

The shortfall in the race’s budget is €300,000 and if the organisers are unable to secure the funding by December 20th, they will cancel next year’s edition.

“We have a responsibility towards our partners, in particular in relation to the host cities and also the teams scheduled to take part who need to plan ahead. Therefore, we need to decide by the end of the year whether the race can take place or not,” explained race director Ewald Strohmeier on the race’s Facebook page.

If the race is unable to go ahead next year, the organisers have said that they are determined to ensure that the 2017 edition takes place.

Sam Bennett (Bora Argon 18) and John Degenkolb (Team Giant Alpecin) both took two stage wins in the 2015 race and Alex Dowsett (Movistar) won overall. The race has taken place continuously since 1989 and amongst others who have won overall are Geraint Thomas, Jens Voigt and Rolf Aldag. 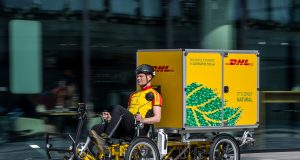 DHL pilots City Hub to increase use of cargo bikes for...