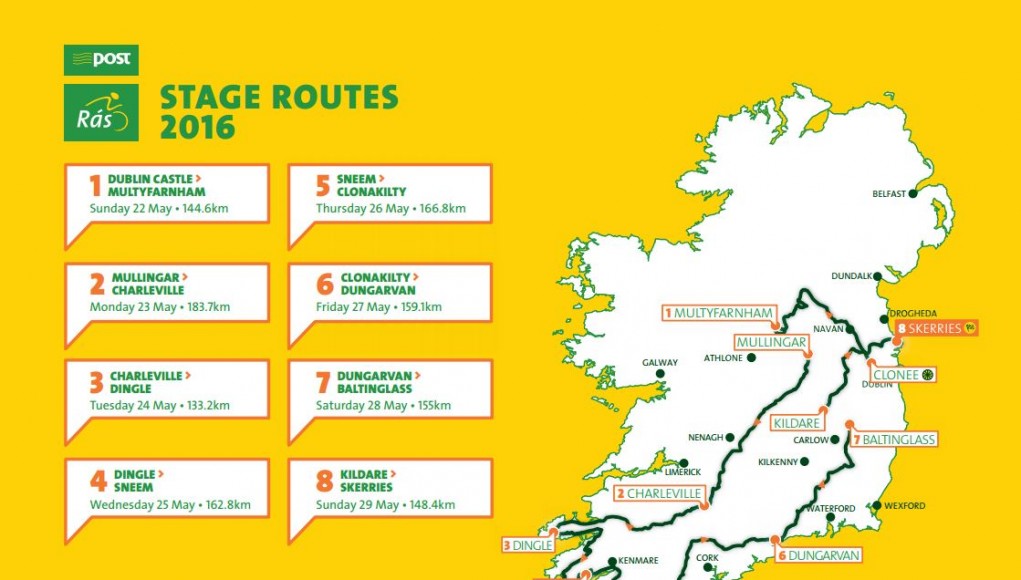 Day one of the 2016 An Post Rás begins at Dublin Castle, the historic surroundings tie in with the centenary of the 1916 Easter Rising. After signing on takes place, the riders will roll out and begin a 15 kilometre neutralised section, passing by Christchurch Cathedral, the Guinness Brewery and Heuston Station, moving through the Phoenix Park and out to Clonee.

Racing begins here, with the flag dropping at 12.30 and the riders beginning a 144.6 kilometre battle for the first yellow jersey.

High speeds are certain as the race moves through Dunshaughlin, Navan and then Bohermeen, where the first An Post Hotspot Sprint will take place just under 24 kilometres after the start. A second follows 7.4 kilometres later in Kells (km. 50.4), offering up more bonus seconds.

The route winds through Maghera, Virginia and Oldcastle prior to the first official climb of the race, the category three ascent of Lough Crew (km. 53.9). From there the riders will hurtle through Castlepollard, battle it out in the An Post Hotspot Sprint in Multyfarnham (km. 125.3) and then complete a 19 kilometre finishing loop before the final sprint in Multyfarnham.

Stage 2, Monday May 23: Mullingar to Charleville (183.7 kilometres):
Stage two of the race is the longest at 183.7 kilometres, but features mainly flat roads and will almost certainly be characterised by high speeds. The route passes through Tullamore after 30 kilometres. It then continues on through Riverstown, Nenagh and Silvermines prior to the day’s sole categorised climb at Shallee (cat. 3, km. 120.3). From there the riders will continue their battles through Newport and on to Caherconlish, where an An Post Prime will further enliven things 147.4 kilometres after the drop of the flag.

That gallop is within the final hour of racing and will pre-empt a dash to the finish line, which will take place on Charleville’s main street.

“This is the longest stage of the race. It is pretty flat, with just one climb, but it will be very fast. The first two stages will be very speedy. It is up to the riders to make the race, and they will.”

From the longest stage to the shortest, day three of the An Post Rás is just 133.2 kilometres in length. However, it contains one of the hardest climbs in the race and could well see big chances made in the general classification.

The early part of the race is flat and fast, moving through Freemount and Newmarket before a Post Office Prime in Ballydesmond (km. 48.2). Soon afterwards the riders will battle it out on the category three ascent of Knockabout Cross (km. 51), then scrap for honours at the Post Office Prime in Scartaglen (km. 60.6).

After that the race moves through Castleisland, Tralee and Stradbally. The peloton then races on to the category one climb of Conor Pass (km. 126.1), with the summit located just 7.1 kilometres from the finish in Dingle and certain to break things apart.

“This is a very rolling stage. It was very hard to categorise the climbs as they kept rising and dropping, but it is hard going. The riders will also do the Connor Pass, hitting a big climb after two flat stages. I think it will play a big part in the general classification.”

More climbs follow on the 162.8 kilometre race from Dingle to Sneem, with the first of those – the category three ascent of Lispole – coming just 9.8 kilometres after the start. After racing through Inch, Castlemaine, Milltown, Killorglin and Cappaghmore, the riders will begin the much tougher Ballaghisheen Pass, with the category one slopes finally relenting 87.4 kilometres in.

After that the peloton will battle it out in an An Post Sprint in Waterville (km. 111.1), on the category two climb of Coomakista (km. 118.6) and at the category three ascent of Letterfinish (km. 156.2). From there less than seven kilometres remain before the final sprint in Sneem and the halfway point of this year’s An Post Rás.

“This is a very rolling stage. Coomakista is a long climb and it could do damage in the bunch. It is a very deceiving climb. The last five kilometres before the finish in Sneem will be very fast, not least because they are resurfacing the whole road.”

Day five is a 148.3 kilometre dash from Sneem to Clonakilty and is another stage featuring a number of climbs.

Early on it moves through Kenmare, Castletownbere and Bonane, then the riders will tackle the second category ascent of Caha Pass (km. 49.5). The descent brings the peloton to Glengarriff, home town of the late actress Maureen O’Hara, and location for a Post Office Prime at Memory Lane (km. 53.4).

The riders will be cheered on through Ballydehob and Skibbereen prior to the day’s penultimate climb, the third category Glandore (km. 117.8). This is followed 18.3 kilometres later by the first passage over the finish line, and the start of a 12.2 kilometre finishing circuit which includes the category two McCurtain Hill (km. 137.1).

This could well act as the platform for late attacks, giving those challenging for the yellow jersey a chance to put some pressure on.

“We are using the tunnel road of Caha Pass. The guys will have a good three kilometres of draggy roads before the climb, which will be hard. The climb of Glanlough is next and it is a sticky rise through the village, which could do damage.

“The stage then finishes with a circuit, and so takes in the hill up to the finish twice. That climb goes on quite a way after the finish line, so that final lap could well break things up.”

Things appear flatter on stage six, with the climbing limited to a trio of category three ascents. The first of these is at Windy Gap (km. 35.6), with the second after the towns of Coachford, Donoghmore and Mallow. The climb of Rathcormack Mountain (km. 94.7) leads the riders on to Aghern, Conna and Curraglas prior to the day’s third ascent, Knockroe (km. 127.8). However, there are many draggy roads too, making things tougher than they seem on paper.

The finale will see the riders hurtle through Lismore and Cappoquin before the final sprint into Dungarvan.

“The race is going over all the back roads around north County Cork. It is a very, very rolling day and while there are only three categorised climbs, it is a very sticky stage. The only time the guys will get a straight run on flat roads is from Lismore to Dungarvan. I don’t expect the bunch to come into Dungarvan together.”

Unless the gaps are tight in the general classification, the penultimate day of racing could prove to be the last chance for those trying to take the yellow jersey to make their move. The 155 kilometre leg from Dungarvan to Baltinglass has four climbs, including a category one ascent, and will be hard-fought.

The peloton will then race through Graiguenamanagh and Borris prior to the day’s biggest mountain, the category one Mount Leinster (km. 106.2).

The riders will then hurtle down the descent and on through Tullow and Rathvilly prior to the finish in Baltinglass.

“Another very rolling stage. There is a tricky little road between Inistioge and Graiguenamanagh and damage could be done there. There could also be big changes going up Mount Leinster.

“After the summit, there will be a very fast run in from Bunclody to Baltinglass, and so gaps could be closed down again. Although it is possible for a rider to stay clear, as happened two years ago when Liam Holohan won the stage.”

The final day of racing will be familiar to those who have competed in recent editions of the An Post Rás, travelling on many of the same roads which lead to the crowd-thronged finale in Skerries.

The stage begins in Kildare and passes through Prosperous, Kilcock, Dunsany, Dunshaughlin, Ratoath and Curraha prior to the first of five category three climbs, that of Pluckhimin (km. 78.2). Coming after the village of Naul, the next climb, Cross of the Cage (km. 97.8), brings the riders onto the 13.8 kilometre finishing circuit and begins the final countdown to the crowning of the 2016 An Post Rás champion.

Following the first passage over the finish line (km. 106.2), the peloton will begin the first of three ascents of the Black Hills climb. These ascents come at kilometre 111, 124.9 and 138.8 and offer a last-gasp chance for attackers to chase the stage win and overall honours.

“On the final stage we have three laps of the finishing circuit. We introduced that third lap last year and it did some damage in the finale, adding to the suspense, and so we decided to keep it in.

“We think the people of Skerries deserve that, they come out in their groves every year to support the race and it’s great to see. You never know what could happen the third time up the climb.” 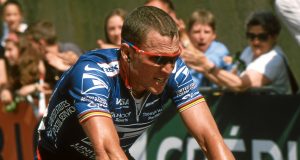